Posted on January 6, 2012 by JoeSolutions

iPhone 5 rumors are starting again. Since the launch of the iPhone 4S last October, the designers started to release new concepts and rumors of the next iPhone, the iPhone 5. ADR Studio has given a fascinating iPhone 5 concept that we would like to show you. Details below! 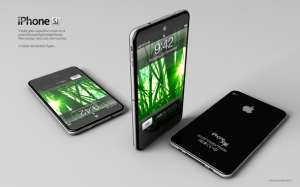 The iPhone concept shown above is created by Antonio De Rosa, a designer who says that the concept will include a “Totally glass capacitive screen on a polycarbonate lightweight body.” He has given it the title of the iPhone SJ as it is inspired by Steve Jobs.

The design is based on the latest available iPhone models, the iPhone 4 and 4S. The concept would also include an A6 dual core processor and a 10-mega pixel camera.

Like Loading...
This entry was posted in iPhone and tagged 5, a6, design, iphone, rumor, sj. Bookmark the permalink.